Golf is a game of wit, talent and extreme concentration. It is a game where competitive players use precision clubs to hit balls into unqiuely placed holes. By avoiding obstacles such as sand traps, trees and water holes, the aim of the sport is to get the ball in the hole with the fewest strokes possible. I have attempted this game several times with my DH and I have learned there is more to the game then what meets the eye.

On Sunday July 28, 2013, my DD1, DH and I had the amazing opportunity to attend the RBC Canadian Open at the Glen Abbey Golf Club in Oakville, Ontario. The sun was shinning, the wind was blowing and excitement sparked the air. We were hushed as shots were lined up, we held our breath as the ball rolled towards the hole and we cheered when unbelievable putt were made. After tricky shots out of sand bunkers, a contortionist acts around a tree and a few amazing putts, Brandt Snedeker went on to win the 2013 RBC Canadian Open with a carded 2 under 70 on Sunday! 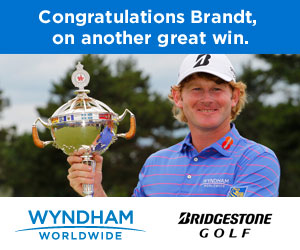 Although the focus of the day was on golf, I was lucky enough to learn about the amazing sponsors who are the foundation of the tournament. One of the official charity partner of the RBC Canadian Open is the Ronald McDonald House Charity (RMHC). First partnering with the RBC Canadian open in 2008, the RMHC foundation, along with Golf Canada, has raised more than $5 million to help families of sick children across Canada.

I first learned about the RMHC back in May, when I wrote a post on McHappy Days. Since attending the RBC Canadian Open, I have learned a whole lot more!

The first Ronald McDonald House was opened in Toronto in 1981, by
George Cohon. It was created as a place for sick children battle against injuries, cancer, heart and lung disease, surgeries, transplants and premature births, etc., to live with their family, while undergoing harsh medical treatment. The Idea is that children heal faster when their family is present to support them. Many of these children travel all over the country in order to recieve the best medical care possible. While doing so, they tend to be far away from home.  By creating a home where sick children can receive the treatment they need, while enabling their families to remain close during the medical crisis, tends to speed up recovery and lead to more positive outcomes.

When your child become seriously ill, a parent’s world stops and their sole focus is aimed at making the child better. This can result in prolonged hospital stays, out of town treatment options that can place additional burdens on a family already struggling. Thanks to the RMDH, the family can find lodging a ‘home away from home’. Unfortunately, the cost to operate one RMDH room is roughly $122 a day. To help subsidize this cost, the Ronald McDonald House Charity was created in 1982 as a way to provide more affordable rates ($11-15/day) to families in need. Through sponsors like McDonald’s, individual donors, corporate donors and community groups, the Ronald McDonald House Charity benefited thousands of children in over 600 Canadian community.

Please help give sick children the best medicine possible; their families!  Thousands of families benefit from your support!